Nasal reconstruction using a paramedian forehead flap is a surgical technique to reconstruct different kinds of defects of the nose. In this operation a reconstructive surgeon uses skin from the forehead above the eyebrow and pivots it vertically to replace missing nasal tissue. Over a period of many years, the technique has been modified and adjusted by many different surgeons and it has evolved to be a popular way of repairing nasal defects. 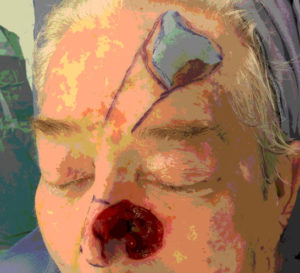 A forehead flap is usually required if the nasal defect is larger than 1.5 cm. If the defect is small and superficial it can be resurfaced with a skin graft or a small flap.

Nasal defects mostly result from excision of malignant skin tumours as basal cell carcinoma or squamous cell carcinoma. Usually, the nasal defect is produced after Mohs surgery to remove a skin cancer. Often, the medical team will have been able to predict that a forehead flap is required to reconstruct the defect before the Mohs surgery in order to warn you to expect it.

The forehead flap is known as the best donor site for repairing nasal defects because of its size, superior vascularity, skin colour, texture and thickness. In particular, the colour and texture of the forehead skin matches exactly with the skin of the nose, which is why the forehead flap is used so much for nasal reconstruction.

Traditionally, the forehead flap is transferred in three stages:

This part of the procedure is usually performed under a general anaesthetic, which means you will be asleep.

A template is made using a piece of paper and is designed from the intact side of the nose to make a precise symmetric reconstruction of the nose. The template resembling the defect is placed just under the hairline and the bridge of skin is drawn downwards to the inner eyebrow.

The skin is incised according to the template and the flap is turned upside-down and inset into the area of the defect on the nose. This is done using fine sutures. Extra pieces of cartilage grafts are often needed for creating support and a good shape to the nose. These are obtained from the ear be creating a small cut at the back that is usually invisible once it has healed.

There is “donor” defect which is limited to small part of the forehead. Most of the defect can usually be closed using a T-shaped scar. The adjoining tissues are stitched together vertically and horizontally. Often there is a small persisting defect on the upper part of the forehead near the hairline depending on the size of the flap. Often this is simply left to heal without stitching and the scar is usually remarkably good and easily disguised. This process takes 4-6 weeks.

On the evening after your general anaesthetic you will feel rather tired and sleepy and should warn your visitors that you may not be very good company!

When you come back from the operating theatre you will have a small needle in your arm or hand attached to a drip. This will stay in until you are eating and drinking normally – usually just overnight.

There will be dressings on your nose and forehead that will need to be regularly changed. The underside of the skin that extends between your forehead and nose is raw and often drips blood for two or more days after the operation. Once the bleeding stops, you will be able to go home.

Before you leave the ward you will be given an appointment for the dressing clinic. Your wound will be checked and your dressing may be changed. You will also be given an outpatient clinic appointment. You may need to come back to the hospital regularly for dressings, as your GP’s practice is unlikely to want to undertake the specialised care that the wound will require.

You may look very bizarre to other people at this stage of the treatment and you will want to avoid most social engagements. Remember that this is only temporary phase in your treatment and will be back to normal soon.

Click here to see a picture of a patient half-way through their treatment.

At first you will feel rather tired and you should spend the first week or so taking it easy. After that you will be able to slowly build up to doing your usual activities.

It is very important that the piece of skin on your nose does not get cold during this time, particularly in the winter months. It may be best to stay indoors at this time except to attend the hospital for clinic appointments.

The second stage is performed three to four weeks later, when the flap is well healed at the recipient site. It is usually done under a general anaesthetic (asleep) but can be performed under a local anaesthetic (awake) with a few injections to make the area go numb if you prefer.

At this stage the pedicle is divided, a small part of the lower forehead is reopened and the inner eyebrow is recreated. If needed the recipient site can be altered to reach a better aesthetic result.

Most patients are discharged home on the same day as their procedure and the sutures are removed a week later.

The third stage is performed approximately four months later, when the flap has settled in well at the recipient site. Often the flap still appears to bulky or “blobby” at this stage. The aim of this stage is to remodel the flap to improve the appearance of the flap to make it look more like a nose. It is usually done under a general anaesthetic (asleep) but can be performed under a local anaesthetic (awake) with a few injections to make the area go numb if you prefer.

At this stage small incisions are made by the flap to allow the remodelling process to take place. In the unlikely event that there have been problems with the scars by the eyebrow, these can be adjusted at the same time

Most patients are discharged home on the same day as their procedure and the sutures are removed a week later.

The goal of nasal reconstruction is to look as normal as possible after reconstruction. Studies have shown that generally patients are very satisfied with the result although they are aware that the nose is not quite the same as before the operations. Patients were especially satisfied with flap colour match and shape of the tip of the nose. Remarkably, patients often felt that their nose looked better than their surgeons did!

Side effects and what could go wrong

The results of nasal reconstruction using the paramedian forehead flap are quite good, although some patients report functional difficulties. A blocked nose, crusts or scabs and difficulties with smelling are reported on occasion by patients. A minority of patients report snoring more often or having a spontaneous nose bleed. Difficulty with speech is very unlikely. The majority of patients are satisfied with function of the nose after reconstruction.

It is unlikely for the operation area to get infected. In this situation it may be necessary to have a course of antibiotics.

Your surgeon will attempt to replace the eyebrow back to its original position. In spite of this, the inner eyebrow could be distorted when it has healed. Rarely another operation may be required to correct this problem.

Sometimes a few hairs from the forehead or scalp may grow on the nose after the procedure. Usually these can be simply plucked out or trimmed with scissors. Occasionally the hairs can be treated with a laser.

Occasionally the flap looks too bulky or distorted when it has healed and settled in after a few months. Further operations may be required to correct this. Often these procedures are minor “touch ups” and can be done under local anaesthetic with a discharge home on the same day.